We are actively seeking landlords with self-contained properties to rent out to to Syrian refugees. Our aim is to support the government’s scheme to resettle some of the most vulnerable Syrians currently suffering in camps surrounding the country. We have been working closely with Hammersmith & Fulham Council to find suitable accommodation.

If you, or someone you know, is interested, please read the Landlords FAQs and get in touch.

Do you have a spare room and can temporarily host a refugee? If so, please get in touch with one of the following organisations:

Positive Action in Housing (PAIH) runs the Room for Refugees scheme set up in 2003 to connect asylum-seekers and refugees of various nationalities with hosts with a spare room. They ask for a minimum of 1-month’s commitment with a 1-week trial. One of our own volunteers (pictured below) is a host for the scheme and and was interviewed in an article in The Guardian newspaper dedicated to the initiative.

Refugees at home is a charity which connects asylum-seekers and refugees who have just received their leave to remain, with hosts with a spare room. They work with a range of nationalities. They look for emergency/short-notice hosting as well as short-term hosting.

Homes for Syrians is a charity which connects Syrian refugees who have just received their leave to remain and need to get on their feet, with hosts with a spare room. Hosting lasts for up to 6 months, in respect of individuals or couples. 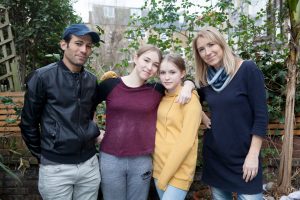 The Refugee Council has issued a guide to help anyone supporting refugees make homelessness applications to local authorities. The guide can be downloaded from the following link